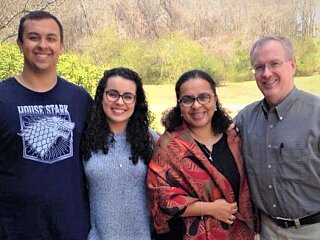 Kevin Millard serves as the Director for Portuguese-speaking countries for Anchored In Truth.  He is a graduate of UNA and Mid-America Baptist Theological Seminary.  He and his wife have been serving the Lord as missionaries for over 25 years. They served in Albania for five years before arriving in Brazil in May of 2000.  From 2002 to 2007 they helped to plant a church in the city Niteroi.  In 2007 they were invited to work with Fiel Ministries in Sao Jose dos Campos (Sao Paulo), where Kevin served as the director of a pastoral library program, which helped Portuguese-speaking pastors in Brazil and other countries attain Reformed literature.  Kevin has also helped with a children's ministry call AME, where he shares weekly devotionals and offers spiritual counseling to the children. Kevin is presently the Interim Pastor at Grace Baptist Mission in São Jose dos Campos.  He and his wife, Edinéia, have two grown children, Deborah and Stephen.  Grace Life Church and Anchored in Truth have been faithfully involved in the Millards' lives and ministry all of these years through giving and praying.

As we prepare for Thanksgiving, there is so much to be thankful for!  Edinéia and I celebrated birthdays last week...she on the 19th (photo), and I on the 16th, respectively.  We are thankful for another year to serve our Lord in Brazil and to help more people come to know Him and grow in the grace and knowledge of the Lord Jesus Christ.  To know the Lord and to be involved in what He is doing here on the earth is a wonderful blessing for which we are most thankful!  And it is through Anchored in Truth and you, our supporting churches and friends, that we are able to serve another year in Brazil and help the Portuguese-speaking people.  So, THANK YOU,  thank you for giving towards the support of our family and ministry!

"I thank my God upon every remembrance of you ...for your fellowship in the gospel

This coming Sunday, November 27th, Igreja Batista no Dom Pedro II ( The Baptist Church in Dom Pedro II), will be officially recognized and commissioned (photo) as an autonomous church here in the city of São Jose dos Campos.  We have been helping with this church plant, called Grace Baptist Mission (photo), for several years, and then assuming the interim pastorate during the pandemic years of 2020 and 2021.  During that time, the Lord used us to help prepare the mission to become an autonomous Baptist church through building renovations and bringing in a qualified Brazilian pastor.  Today that pastor is Denis Ferreira (photo with family), an AIT-supported pastor.  Denis will be installed as the Lead Pastor of the new church this coming Sunday.  I will continue to serve as one of the church's assistant pastors.  Denis began helping with the church last year, and through AIT's help, officially joined the work in December of 2021.  We are already training some young men as we prepare to lead the new church to be a healthy local church in reaching the community with the gospel, and making new disciples.  Pray for us as we seek to be obedient to the Great Commission of our Lord Jesus Christ!

This past month, the new project, Portuguese Speaking Pastors, or PSP, was officially launched!  The purpose of the PSP will be to help support pastors and projects related to our Anchored in Truth ministry in Brazil and in other countries.  A key pastor who has been involved in AIT ministry endeavors and conferences, Pastor Samuel Quimputo in Portugal (photos), has already been assisted by the PSP and will continue to receive support in 2023!  The PSP will help us do more in reaching the Portuguese-speaking world with good preachers, good teaching, and good literature.  For those who would like more information about the PSP project, please let us know.  Pray that God will use AIT and the PSP for his purpose and glory!