Daniel Shwe is the pastor of Grace Baptist Church in North Watford. Watford is a town and borough in Hertfordshire, England, situated 20 miles (32 km) northwest of central London and within the bounds of the M25 motorway. The borough is separated from Greater London to the south by the urbanised parish of Watford Rural in the Three Rivers District. North Watford is situated between Central Watford and Garston. The population is around 95,000 and around 30% have no religious affiliation. Most of Grace Baptist's services have 12 - 13 nationalities represented. 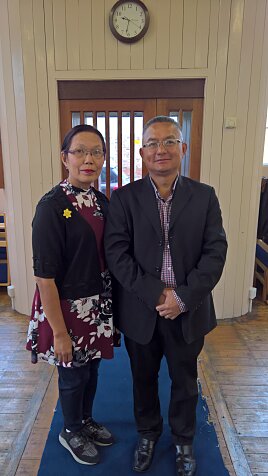 Some seasons of ministry may require us to press on despite personal weariness, but if we are exhausted and exasperated, it should not be because of any lack of provision. Through your prayers and giving, you encourage us to keep pursuing the mission of God even when faint.

Christians must faithfully and consistently offer the redeeming grace of the crucified and resurrected Christ as truly good news to a world ravaged by bad news. A church will only be as enthusiastic about evangelism as its leadership, thus it is critical that pastors lead the way in these things, and equip and empower church members to do them.

Anyone who knows Daniel Shwe - pastor of Grace Baptist Church North Watford - at all well, knows that he takes the apostolic command to “do the work of an evangelist” seriously and personally, and is eager to see the church taking up this work alongside him. Though the church has already worked diligently to meet their neighbours and introduce them to Jesus, they have decided to put even more effort into reaching out to all households in North Watford with the gospel. This local church effort has been one of partnership - from three months of weekly evangelism training on Thursday nights led by IMB missionaries Mike McCoy and Drew Moss, to evangelism support from members of nearby Derby Road Baptist Church, The Angel Church in Angel, Islington, and Grace Baptist Chapel Tottenham.

Even as the church has been helped by other churches, they are likewise being a help themselves. Daniel, supported by Grace Baptist Partnership, has for many years provided regular evangelistic assistance to church planting and revitalisation projects. 2022 will be no different, with Daniel working for several months in Wimbledon on a weekly basis. North Watford church member Jaime Sanchez has also moved to the Wimbledon area with his family, where they will be actively involved in the project from its beginning. Another man from the church - Tayo Adeoye - is assisting Hightown Baptist Church in Luton with preaching once a month for six months, having completed the Basic Training course of Grace Baptist Partnership’s Growing Leaders London programme, hosted by Grace Baptist Church Wood Green.

As ever, God is pleased to build his church through the witness of his people: Boris, an agnostic student from Bulgaria, met church deacon Stuart Lee and Daniel doing street evangelism. Subsequent gospel conversations on the street and one-to-one meetings with Daniel led to his profession of faith and baptism. Now Boris is doing evangelism. 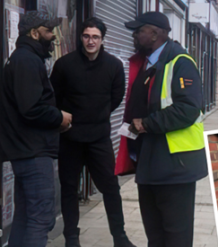